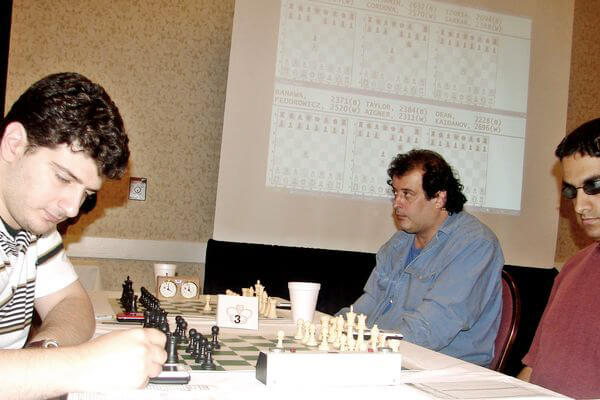 By Chris Bird
I  was the Bulletin Editor at this year's US Open (and also the Las Vegas Masters and National Open) and liaised with the MonRoi representatives in regards to collecting game scores for publication and also to help them set up their necessary equipment that allowed for spectators to observe the games of the top 6 boards on a big screen and provide live broadcast of the games on the Internet.

The MonRoi system was initially made available to the top 15 boards in the Traditional Schedule and the top 5 boards in the 6-Day Schedule. This was then changed once the schedules merged and one PCM (Personal Chess Manager as they call it) was provided to the top 30 rated players in the tournament to help maximize the live coverage and to also minimize my work load in obtaining legible scoresheets and having to input them. They also used the PCM on the top 5 boards in the Denker and Polgar Tournaments.They also had units available for players to "rent" at a cost of $10/game or $45 for the whole tournament. At the end of the tournament, MonRoi had managed to sell every one of the units they had brought with them for purchasing and each of them at $359. Just about everyone who rented one then went on to purchase it, and the players who had used one in the early rounds but were no longer in the top 30 rated players when we made the switch were clammering to obtain one to use.With my Bulletin Editor cap on, the advantages to such a system are huge. I was able to follow (on ICC) the live radio commentary and obtain some useful notes to use for analysis and position of diagrams and I obtained the scores from at least the top 15/20 boards every round and did not have to input any of them. This in turn allowed me to provide more scores from the lower boards as time permitted.With my TD hat on I saw the potential for numerous organizers, particularly scholastic organizers, for them to purchase the systems and rent or lease them out for use at events thereby obtaining some costs back. Games from top boards could be displayed in other rooms allowing the parents to watch meaningful games, or friends and family to watch from the comfort of their own homes. Many of the Denker and Polgar players were commenting on how everyone was back home and tuned in to every game they played!There is also the potential for many other organizers to have systems at their disposal, which could in turn increase turnout in their events, increase potential for sponsorship as there are inbuilt marketing tools that come with the system and for players to have a more interactive experience, e.g. viewing the games online once they are complete without having to have someone to enter them all and waiting for maybe a few days after the event.The main system software that I was shown looked very simple to set up and use and the PCM's send and receive information wirelessly to and from the main computer. A player who has one of these devices could in theory just turn it on and tap one button, which would then receive information from the central computer telling them exactly who their opponent was, their rating, what color they had and on what board meaning they wouldn't have to fight the crowd at the displays.One suggestion I had for improvement was to have them liaise with the main pairing program software companies, WinTD and SwissSys and see if they could devise an aspect of their program that allowed for a seamless transition of the pairings and player lists from the pairing program to the MonRoi Central Software. You can export and import the player list.In summary I have used this system at three major events and each tournament has gained more exposure than it had the previous year, mainly due to the online services and games relay that the system allows for. However, having seen the way players were buying the systems and some players were complaining that there were none left for them to use, they are going to become extremely popular, especially at major events.