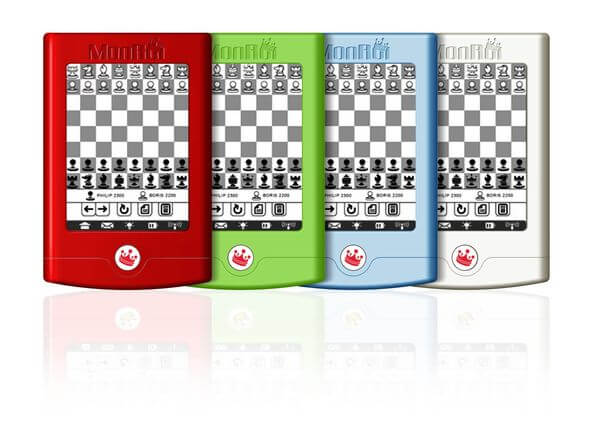 Bad things can happen in the course of a chess tournament. Yes, you can be savagely beaten by a lower-ranked player. But that's not all. Bad things can also happen to the record-keeping. With lots of games in progress at once and everyone intent on the competition, it isn't hard for scorekeepers to misrecord or mistranscribe a move, leaving a permanent void in the record of play. Such snafus are unacceptable, especially when a global audience of aficionados eagerly awaits the results of certain matches.

A new company called MonRoi is addressing these issues with a unique handheld device. The PDA-sized Personal Chess Manager allows players to record each move in a game as it happens.

The device can wirelessly convey the moves to a hub, which links to a PC for record-keeping and relays the data to the Internet, allowing fans around the world to enjoy the match in near real time.

The device also functions as a playback machine, storing a large number of games that the user can upload and download to and from a PC. So you can review exactly what it was that that little creep did to your beautifully executed variation on the French Defense. Or you can console yourself by reliving one of Alexander Alekhine's greatest humiliations.

The Personal Chess Manager is the brainchild of Brana Malobabic-Giancristofaro, who left Nortel to found MonRoi. "After working on optical-switching gear, we thought, 'Well, the complexity is not here in a little handheld device,'" the founder says.

She soon learned otherwise. The project faced rigorous demands for space, weight, cost, and power (the device had to operate from a single battery charge for at least 10 hours). Add in the time-to-market demands dictated by a small startup's need to survive, and the project turned out to be a complex undertaking indeed.

Moreover, the product needed to win approval from the World Chess Federation. In order to win that blessing, the complete system, which was to include the handset, the hub, software on both, and a hardened wireless link, had to be rock-solid and tamper-proof. Instead of adapting an existing set of hardware and software or working from a reference design, MonRoi found itself starting from a clean sheet of paper.

At the top level, the MonRoi Personal Chess Manager is simplicity itself: a basic design that has been executed over and over again by PDA developers. At the heart of the system, a microcontroller—an ARM-7, of course—executes operating software, device drivers, and applications. Surrounding the microcontroller one finds various types of memory, a color touch-screen LCD, and a radio for the wireless link.

The above essentially describes MonRoi's first development prototype, according to Malobabic-Giancristofaro. The company assembled the device from a Philips ARM-based microcontroller, an LCD controller, memory, LCD, and an internally designed wireless module. The prototype proved to be an adequate application-development platform. And the team had a great deal of code to develop, including a secure kernel—a sufficiently hardened and energy-efficient commercial embedded OS could not be found—and a wireless frequency band and protocol that could provide a secure wireless link between the handheld and its hub. With sometimes large amounts of money and even larger chunks of prestige riding on each move, an easily hacked system would have been a nonstarter.

But when the design team faced issues with parts availability for the LCD controller and questions about the power budget, cost, and level of integration, MonRoi went looking for alternatives for the production design.

The team found Sharp Microelectronics. Initially, Sharp appealed to the MonRoi design team because it offered an ARM-based microcontroller that had an integral display controller already interfaced to a suitable Sharp color LCD. The previous panel had been monochrome, which was not a selling point in the chess world. Malobabic-Giancristofaro soon realized that MonRoi's relationship with the larger company's customer engineering team would be an even more valuable asset.

"The start of cooperation between our engineers and theirs was power calculations," Malobabic-Giancristofaro says. Normal energy-saving strategies for handheld devices were not going to cut it in this case, she explains. The MonRoi engineers, with their detailed knowledge of system behavior and—just as important—the sequence and pacing of events during a chess match, worked with the Sharp engineers to analyze how the bursts of activity and long idle periods of a chess game would impact the duty cycles of the subsystems in the Personal Chess Manager. They then mapped these onto the various energy-saving modes and clock-frequency choices of the microcontroller. The objective, glowering over the calculations like Bobby Fischer in a bad mood, was that demand for 10-hour operating life.

From there, the cooperation deepened, Malobabic-Giancristofaro says. Sharp engineers consulted with the team on the integration of the microcontroller into the handheld system. They also wrote a custom set of reference code for their LCD controller when the MonRoi team encountered some specific issues during the design.

"The Sharp engineers participated in all of our design reviews, often making excellent comments, even in areas that were not directly concerned with the MCU or LCD," Malobabic-Giancristofaro says. In effect, the Sharp team's system expertise became a part of the deliverable product to MonRoi.

The relationship between the two companies represents a distinct third alternative, different not only from a ground-up new design but also from a design based on a full reference design. Rather than handing MonRoi a model and a good-luck wish, Sharp joined in the effort to create an entirely new design, functioning more as a design partner than as a parts supplier. The approach had a significant impact on both design time and the ability of the team to meet its stringent goals.