Most serious games of chess are, and have always been, played using chess clocks. The main reason for using a chess clock is so that the game does not take an infinite amount of time to play. Even correspondence chess, played via regular mail or email, has a limit to the amount of days/weeks/months a player can use for moves to ensure a game does not go on forever.

However, the world of chess clocks can be a daunting one, especially to beginners although even the most experienced professionals sometimes have problems getting to grips with new clocks and time control ideas that are cooked up by some of the most innovative organizers.

In this article, I want to try and provide an understanding of what is meant by various chess clock related chess terms such as increment, flag, 40/2, Bronstein, time-delay, analog, etc. Let’s start with the basic information needed to understand a chess clock and how that relates into the chess world.

Each chess clock needs to some basic pieces of information. The ability to show who’s move it is, how much time both players have remaining in the game and the ability to show when each player has run out of time, commonly known as a “flag.” A chess clock also needs a mechanism that allows one player to stop his time from running, which also concurrently starts his opponent’s time counting down.

Let us take a basic game of chess and give each player one hour to complete the entire game. The game is started by the player with the black pieces starting white’s clock, usually by pressing a button on his side of the clock. White’s one hour starts counting down, 1 hour… 59 minutes, 59 seconds… 59 minutes, 58 seconds, etc. White makes his move then presses his button which stops his time from counting down and begins Black’s time. Black’s clock then starts counting down the same way until he makes a move and once again presses the button to stop his time counting down and begin White’s time, etc.

The game continues until either a result is agreed over the board in the normal way, e.g. white wins, black wins or the game is a draw, or one of the players runs out of time, meaning they have used more than the one hour they were allocated to complete the game. Usually such a moment is defined by the clock signaling that a player’s “flag has fallen” and that also usually (but not always as defined by the rules) means that the player who runs out of time loses the game.

There you have the basic understanding of a chess clock and its purpose in a chess game. However, things are never so simple and over time various different types of nuances and advances in technology of chess clocks has lead to a chess player needing to understand a lot more that just this basic premise.

First off, let’s start with two words that immediately categorize the type of chess clock in use, “analog” and “digital.”

An analog clock is one that has a face like a regular clock, with a minute (big) hand and an hour (little) hand for showing the time. More often than not, the clock will have to be wound up so that it doesn’t stop during a game although there are battery operated versions of analog clocks. Analog clocks do not have methods of “delaying” or “incrementing” time and are now considered an outdated form of chess clock, although they are still sold today and are very common at chess events around the world.

One of the biggest drawbacks of an analog clock is the inconvenience of having to readjust the time manually when more than one time period exists that is not a multiple of one hour. This is because the flag fall can only happen on the hour, e.g. 6 o’clock, 7 o’clock, etc. For example, if you provide a player with 30 additional minutes to his time at move 40, then you have to manually move both player’s clocks back by those 30 minutes to ensure the flag falls exactly on the hour since there is not a flag at the 30 minute mark.

Digital clocks are now seen as the way of the future as they can handle the multitude of different and multiple time controls without usually having to be adjusted. They can also take care of the various methods now defined to stop time scrambles and players losing on time when they having easily won positions such as “delay” and “increments.” 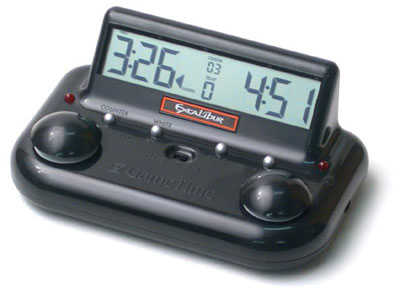 The biggest drawbacks with digital clocks are that they are sometimes complicated to initially set up and there are so many of them out there, not all of them capable of the same things, that it is sometimes confusing for both the players and the arbiters/TDs to understand what is happening in terms of the remaining clock times each player has. They are infrequently set up incorrectly, which causes problems later into a game since you usually cannot tell this from the initial display, and of course they are battery operated, providing another potential problem.

You could also run into problems in actually telling when a flag falls as each digital clock on the market seems to have its own way of displaying this information, some of which are plainly obvious and some of which are very unclear and even stealth like. Not very helpful.

However, having said that, most people nowadays will prefer the use of a digital clock which has much more precision than its analog counterpart and, as mentioned previously, can automatically handle complicated time controls. In fact, the USCF rules specifically state that a digital clock “with delay” (and set to use that delay!) should be used in preference to an analog clock.

There is no standard way of displaying a time control and you will see countless different methods used. Here are just a very few examples:

As you can see, sometimes people quote hours or minutes and sometimes people use “SD” or “G” to define a time control that means “the rest of the game” or “to the finish.” There are items in brackets and sometimes things are spelled out. There is no consistency although chess players continuously have to determine what these things mean. So how do you tell what time controls to set your clock for?

You may also see the term “Allegro Finish” which is the same as Sudden Death (SD) or Game in (G). It just means play to a finish. For example, 30 moves in 90 minutes then 15 minute allegro finish basically means you have 90 minutes to make 30 moves then at move 31 you get an additional 15 minutes and play to the end.

Note that you always add the time in second and subsequent time periods to the time you carried over from the previous time period. For instance, if you are playing 40/2, SD/1 and after playing move 40 you had 30 minutes remaining from your original two hours then you would have 1 hour, 30 minutes to complete the game once your additional hour is added on.

Then, even after you have deciphered the time control, including all the relevant time periods, you need to know if there is a “delay” or “increment” and whether it applies to each and every move or just specific time periods.

A delay is an amount of time that the clock will freeze for before beginning to count your time down. A 5-second-delay is very common in the US and is actually a default/recommended setting for slow time controls.

The delay is intended to give you some free time for each move although you do not have to use the entire delay before making your move and pressing the clock. However, you will never gain additional time with a delay so your clock could remain with the same amount of time remaining for a lot of moves if you continuously move within the delay period.

For example, each player starts the game with 60 minutes plus a 5 second delay per move. Black starts white’s clock and it will wait for 5 seconds before starting to reduce the amount of time that white has. If white moves within that 5 seconds and presses his clock then he will still have 60 minutes to complete the remainder of the game. If it takes white 10 seconds to move and press his clock, his clock will show him with 59 minutes, 55 seconds remaining since the initial 5 seconds was the “delay” period in which the clock did not count down any time.

The Bronstein method works in exactly the same way as a time-delay except that it adds the time back after you hit the clock rather than waiting initially. This gets very confusing for some people despite the fact that it is exactly the same!

For example, if we use the same scenario as above for the delay we will see this clock do different things but reach the same answers. The game is 60 minutes plus a 5 second Bronstein type delay per move. Black starts white’s clock which immediately starts counting down. However, white moves within the 5 seconds and after he presses his clock his time jumps back to 60 minutes. If it takes white 10 seconds to move and press his clock, his clock will start counting down immediately and will show him at 59 minutes, 50 seconds but as soon as he presses his clock the 5 seconds from the Bronstein delay will be added back to his time leaving him at 59 minutes, 55 seconds.

One thing to remember is that Bronstein mode will never add back more time than the delay is set for. If you set it for 5 seconds and you move within that initial 5 seconds, your time will reset back to what it was before the start of that particular move. You will never gain time with this setting.

The other confusing thing with Bronstein is what happens when you only have a small number of seconds remaining. Well, at the start of your move you can never have fewer seconds than the time the Bronstein delay is set for. For instance, if it is a 5-second Bronstein delay then you will always have at least 5 seconds at the start of every one of your moves since if you move before your flag falls, the time will revert back to the 5 seconds you started with or give you the 5 seconds back if you started that particular move with more than 5 seconds.

An increment is a time setting that adds time to whatever you have remaining after you make a move. One of the most popular time settings recently was FIDE’s G/90 +30, which basically meant the whole game in 90 minutes with a 30 second increment after every move. If you move very quickly, quicker than the increment setting, it is possible to increase the amount of time you have remaining since the total incremental time is added to whatever you had, irrespective of how much time you take to complete a move.

FIDE have recently started getting very innovative with the use of increments in that the most recent top events only had the increment for the final time period.For instance, their recent Grand Prix series had the following time control:

At least I’ve yet to see anyone use both an increment and a delay in the same time control although maybe that’s just a matter of time. At least the newer digital clocks on the market have this capability, just incase!

I hope this little run through of chess clocks and how to read time controls helps you gain an understanding of the ever more confusing world of how time works in the chess world. Maybe someday time controls will have a standard syntax, a la the Chess Informant world, and there will be no more confusion. One can only hope.